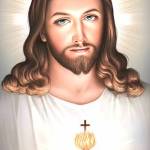 In Christianity, Jesus is the Son of God and in mainstream Christian denominations he is the incarnation of God the Son, the second person in the Trinity. He is believed to be the Jewish messiah (the Christ) who is prophesied in the Hebrew Bible, which is called the Old Testament in Christianity. It is believed that through his crucifixion and subsequent resurrection, God offered humans salvation and eternal life, that Jesus died to atone for sin to make humanity right with God.

You have already rated this page!